The Survival Instincts of Cats are Described

“There isn’t much genetic difference between our domestic cats and wild cats,” Lugones explains. “They’ve kept a lot of their wild characteristics and natural survival instincts, like the ability to pursue, hunt, and pounce their prey, whether it’s small creatures outside or toys we have for them inside our houses,”.

The “righting reflex,” another of these reflexes, explains why many felines land on their feet following a fall. They can instinctively adjust their bodies to land on their paws, so only their pride is wounded. However, depending on the severity of the fall, the kitty may not be able to put her best foot forward at all times, and major injuries may result. The righting reflex is purely instinctual, and cats are still exposed to the risks they confront.

What Is the Average Life Expectancy of Cats?

In general, domestic cats live 12–15 years on average, while outdoor cats live 2–5 years on average. Sickness, being hit by a vehicle, ingesting poison, and fending off predators are all things that can limit an outdoor cat’s lifetime. Genetics, health, and availability to veterinary care, on the other hand, all play an important role.

So, how can you give your cat a fighting chance against the passing of time? Lugones has a few suggestions for you. 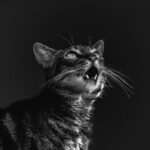